Amin was born in Tehran, Iran and immigrated to Toronto, Ontario, Canada in 1985. He graduated from Seneca College (York Campus) on April, 2008 and received a diploma for Computer Networking and Technical Support and looks forward to continuing his education. Other sports he enjoys playing include basketball, football, volleyball and tennis. He understands that an active lifestyle is a healthy one.

He enjoys spending quality time with his wife and two children. Other hobbies include working with tools and carpentry, producing music, playing guitar, piano, chess, camping, snowboarding/skiing, cooking, exercising, reading, computers, online gaming and of course, watching soccer! He hopes to bring more and more people together to appreciate the beauty of the sport by working together as a team to help each other exceed their limits. He believes that perfection only comes with patience, discipline, practice and effort, much like wisdom, and looks forward to when he can look back on the journey that got him there. 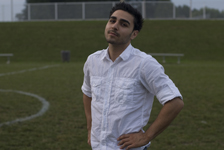 Richmond Green, the field where it all started."

"Because limits, like fear, are often just an illusion" - Michael Jordan

"Those who think they have not time for bodily exercise will sooner or later have to find time for illness." - Edward Stanley

"If you don’t build your dream, someone will hire you to help you build theirs" - Tony Gaskins

The name Justice League started out as a joke between two friends while playing ping pong during College. Sometimes there would be a discrepancy as to whether or not the ball was in or out. They used the next match point to determine if that was really the case. Ultimately, they let the ball decide. If the ball turned out to be the opposite of what was claimed, they would say 'JUSTICE!'. They let the forces of nature take charge in the deciding factor.

For comic fans out there, the name is also based on the famous Justice League comics which can be found among the comic book collection of our founder.

The word 'Football' was used because soccer is known worldwide as football, and to stay true to the game even if it may cause some confusion! We are not to be mistaken for American Football!

JLSoccer.com is a soccer league based out of Toronto, Ontario, Canada which hosts indoor and outdoor leagues, weekly indoor pickup games and also sells custom soccer uniforms, apparel and equipment. Games are held throughout the Greater Toronto Area all year round. Currently, JLSoccer provides men's weekly indoor pickup games, men's indoor and outdoor soccer leagues. In the future, JLSoccer hopes to expand into the youth market, women and men over thirty-five years of age by offering such programs as pickup games, training clinics, tournaments and leagues.

Justice League Football was created with the purpose of providing local communities with affordable soccer rates, quality customer service and game play, an outlet for individual players to participate and to spread the passion for the game and for the love of soccer!

JLSoccer hopes that by continuing to better and offer its services it will become the main source of soccer within the community. Long term goals include concentrating on securing more sponsorships, hosting charity events, developing the brand, adding additional website functionalities and expanding into various programs and facilities.